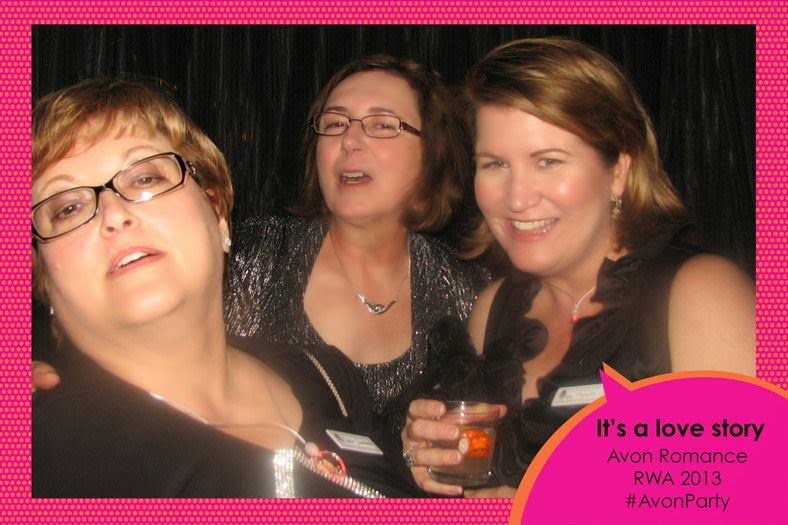 I've been so lucky to hang out with Lorraine at the RT Book Lovers Convention and the RWA Conference last year. She has a wicked sense of humor. See what I mean? This was at the Avon cocktail party. We were trying for sexy. I failed miserably. HA!  (From left to right: me, Lorraine, and Kay Thomas - another wonderful author.)

Lorraine's such a sweetheart. She even took time out of her crazy schedule (the woman writes like . . . a bunch!) to answer some questions.

Who are your top five authors to read?

What is your go-to book to read over and over again?

Who influenced your writing the most? Why?

I would have to go with LaVyrle Spencer because Morning Glory introduced me to the romance genre and made me fall in love with it. I wanted to write stories that touched me as that one did.

What a coincidence! I own a hardcover copy of it.

Describe where you are the most productive when you write.

In my office, late at night, with the lights low and a CD of a thunderstorm playing.

Oh, I would love that. Love thunderstorms, lightning, rain. I often listen to piano sonatas, especially Chopin. Though I've been known to listen to Japanese Rock on iRadio. Usually, I'm writing about blowing something up then.  :-)

Tells us a little about your current book. 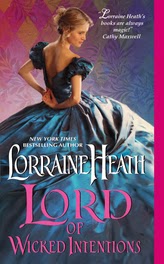 My latest release is a novella, THE LAST WICKED SCOUNDREL. But my current book is LORD OF WICKED INTENTIONS. It’s the story of the last lost lord of Pembrook who has built walls around himself to protect himself from any sort of emotion. Rafe owns a gambling hell. A man in his debt is auctioning off his illegitimate sister as a way to raise funds. Rafe takes the sister to become his mistress. He is a man who wants nothing to do with love while she craves only love.

Show us your one favorite scene of dialogue from that book.

Taking a chair by the fire, he indicated the one opposite him. Slowly, gracefully, she sank into it. He sipped slowly on his Scotch while she studied the fire. Finally she brought her gaze to bear on him.

She gave him a small smile. “Lord Wortham. I’m afraid I’ve not quite accepted that my father is gone. Anyway, he said I was here to manage your household, but quite honestly it appears to be well managed already, so I’m not quite certain what I could contribute.”

“I’m certain you can contribute quite a bit.” He savored another long sip. “What were his exact words?”

Her delicate brow furrowed, she looked back at the fire. “That I was to see to your needs.”

“My needs,” he emphasized. “Not those of my residence.”

Her gaze swung back to him, the furrow deeper. “I’m not sure I understand. Do you not have a valet to see to your needs?”

“Then I can’t see that I would have much to do.”

She was too innocent, far too innocent for the likes of him. He should send her back to her brother, but unfortunately for her, he had decided that he wanted her. He wasn’t quite certain when it struck him so forcefully that he did. Perhaps when he opened the parlor door and saw her waiting there. Waiting for him. When had anyone ever been waiting for him?

“What did you think was the purpose of last night’s . . . entertainment?”

“To secure me a husband.”

He nearly choked on his Scotch. The very last thing he would ever contemplate was marriage. If she knew him at all, she’d know that. But therein resided part of the problem: She didn’t know him, and he preferred to keep it that way.

“I was most surprised,” she continued, “to find myself arriving at your residence when I was left with the distinct impression that you found me hardly worth a thought.”

Hardly worth a thought? How he wished that was true. He’d been unable to stop thinking about her since he’d first seen her. She invaded his dreams, inhabited his thoughts, occupied his mind.

“To be quite honest,” she carried on, “I suspect I will not be here long before someone offers for me. I doubt it is worth it to either of us for me to be in your employ.”

While he didn’t relish the thought of shattering her naiveté, he didn’t much like this dancing about either. Best to just get it said. “You’re not to be in my employ. You’re to be in my bed.”

“Your brother was seeking to find a man to take you as his mistress, not as his wife.”

She shook her head slightly as though she were almost frozen in disbelief, as though working out what he’d said was taking all her energy. “That can’t be. He promised Father that he would see that I was well taken care of.”

“Mistresses are often treated better than wives. At least I have no wife on the side, which is more than I can say for a few of the gents who were in attendance last night. As my mistress—”

“You want me to be your mistress? But you don’t even like me.”

“I don’t have to like you to bed you. Truth be told, it’s better that there be no sentiment between us.”

She came to her feet in such a rush he was surprised she didn’t stumble. However she did drop her glass. It fell to the carpet, spilling his extremely expensive Scotch.

“You’re wrong about last night,” she announced, her eyes welling with tears. “About Geoffrey’s intentions. He wouldn’t have brought me here if he’d known what you assumed, what you planned. He promised. He promised Father . . .”

Then she fairly raced from the parlor. He heard the front door slam, could almost feel the walls trembling with the impact. Swearing harshly, he tossed back his Scotch.

He supposed he could have handled that a bit better.

LOVE THAT BOOK! And great choice. That scene had so much emotion. Loved it!

What do you believe makes a man sexy?

Kindness, laughter—and okay, penetrating eyes. I’m all about the eyes.

Thanks so much for the fun interview!

By the way, Lorraine also writes under the names of Rachel Hawthorne, Jade Parker, and J.A. London. In the last persona, she writes young adult novels with her son. Isn't she amazing?!

GIVEAWAY
She has also kindly offered to give away a copy of LORD OF WICKED INTENTIONS to some lucky person who leaves a comment.

I have two copies of this book (both signed) and I can tell you, I won't part with either one. So yes, you will love it.

Interview by Carla Swafford
​
The Circle Trilogy - Hot Romantic Suspense
www.carlaswafford.com
Look for me on Facebook, Twitter, Pinterest, & Google+
Check out my books on Goodreads
Time Magazine, ". . . involves deadly assassins, drug lords and doing it."
Posted by Carla Swafford at 5:00 AM

I'm so excited to read this book!

After reading that tidbit that certainly sounds like something I'd love to read!

Carla, not my most flattering photo! But it sure was a fun night!!

Marney and Jacqui: It was a fun book to write. I love heroes who are brought to their knees by love.

Wonderful interview! And the excerpt made me go directly to the Kindle (Thanks a lot, Lorraine! My husband will NOT be as thrilled as I am. LOL!). Loved the excerpt, and the last line? I laughed out loud! It was great!

Thank you, Lorraine and Carla!

Lorraine - thank you so much for visiting our blog. I haven't had a chance to read any of your books yet, but now you are on top of my list for my next read! I really enjoyed your interview.

I know, I know, Lorraine. But everytime I look at it, I smile. Loved every minute hanging out with you. HUGS.

Naima: Thank you so much! I hope you enjoy it.

Heather: I'm a firm believer that what happens at RT stays at RT. (Esp. when Carla is involved!) Suffice to say that I have a blast with her.

Whew! You had me sweating bullets there, Lorraine. I was afraid you'd tell on me. :-)

Of course, Lorraine looks all innocent, but let's say those hot scenes aren't for Bible study class. Unless we're talking about going out to multiply, if you get my drift. LOL!

Love ya, my Avon buddy!

Oh my, that book just moved to the top of my TBR pile. It's going to be hot tonight!!

Love the cover!! I can't wait to read this one, it sounds great!

Wonderful interview! And, alas, another book added to my TBR pile:)

Stunning cover. That is a great scene.

This was such a wonderful read! I am a big fan of your work, Lorraine, and I thoroughly enjoyed Lord of Wicked Intentions!

And I cannot begin to imagine the trouble that particular trio got into at RT !

It was so much fun to visit with y'all. Carla, as always I have a blast with you. Thanks so much for inviting me.

Marney: You're the winner of LORD OF WICKED INTENTIONS! Can you email me at lorraine-heath@sbcglobal.net and give me your address as to where I should send the book? I can also send it electronically if that's your preference.

Thanks, everyone, for joining me here!

Thank you so much for the interview and dropping by, Lorraine!! Love ya bunches!

Congratulations to Marney!! You're going to love it!

Ooh, love the excerpt . Makes me even more eager to read it. Always love a great romance with a bit of humor. They brighten up my day.
Thanks for the chance to win.