Since it’s October, I’m telling spooky family tales every Wednesday on my blog. Here, I’ll be sharing a ghost story from my hometown. May your October be Spooktacular.


The Legends of White’s Bridge
Down in South Georgia, where I grew up, the locals have long told ghost stories about White’s Bridge. The church and cemetery sit on a sharp bend in White’s Bridge Road and the bridge, around the curve, crosses over Spring Creek. 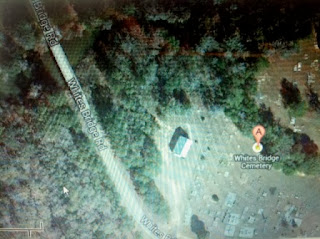 
Nowadays, the creek isn’t very deep, but once upon a time, it was deep and had a strong current. My friends and I swam there in high school, so twenty years ago, it was at least deep enough to swim in.
In my day and before, in my mom’s day, kids would listen to the tales and then drive out into the country to try to bear witness to some of the legends. One legend says, if you venture to step into the cemetery at night, lights will come on over the graves. Not gas lanterns or solar powered LED lights, but eerie, unnatural glowing balls of light that hover over the graves. Rumor has it a lot of casualties were buried on the sight from the Confederate and Indian wars. If you’ve never heard, warrior spirits don’t always rest peacefully. ***insert wicked laughter*** 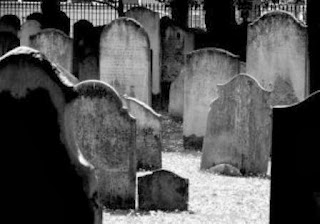 One story that seems to have started the fascination with White’s Bridge is a tale of love and deception with tragic consequences.
Years ago, when cars were new but the roads were still one lane horse and buggy trails, a young couple ran away together to get married. Their families were at odds, think Capulets and Montagues, or even better, Hatfields and McCoys. The young man and woman had loved each other since childhood, but their families were keeping them apart. Their plan was to drive to the next county and get married. When they returned home, their families wouldn’t be able to separate them. 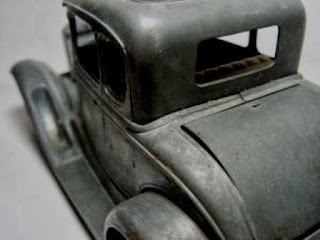 The young woman packed a small suitcase and snuck out of her house, through the woods and met her man at the end of the dirt lane. Shortly after they crossed the county line, they experienced car trouble. One lane roads often had pull-off areas every now and then so people could pass each other. The couple got out and pushed the car in search of a pull off.
The first place they came to was the White’s Bridge Church yard. There was a giant old oak tree near the road, so they pushed the car under the tree. The young man told his lady to wait in the car while he went for help. 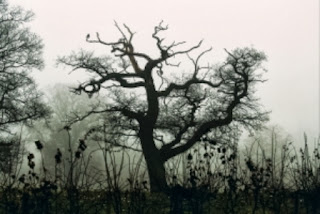 Darkness fell and the young woman grew anxious as the wind picked up. A storm raged overhead with heavy rain, deafening thunder, and blinding lightning. The wind blew the branches of the oak and they bumped and scraped across the roof of the car. The frightened woman opened her car door and ran for the church.
In those days, churches were left open as places of sanctuary for travelers on the road. There would be provisions for visitors to use like food, firewood, and bed rolls. The woman started a fire while she waited for her fiancé to return. She passed the time by practicing her wedding march up and down the aisle of the little church. When the storm calmed and she grew tired, she lay down and went to sleep. 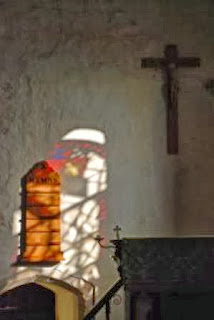 The early morning sun streamed through the stained glass window and woke her. Concerned that her man might be looking for her, she threw open the doors of the church and found him...hanging from a limb of the oak tree.
What she thought was a branch brushing the car’s roof was actually his feet. In her despair, she ran for the bridge, and with a heart-piercing scream, she jumped. She didn’t fight as the deep water and strong current carried her down to the bottom of Spring Creek. They later found her lifeless body floating in the water.
It was rumored that the young woman’s family knew about their secret plan to marry and was responsible for murdering her fiancé. Nothing was ever proven and no one was punished for the crime.


They say, if you go out to White’s Bridge when the moon is right, you can hear the woman’s screams and see her floating in the creek.

Are you scared yet? Are there local ghost legends where you live?
Posted by Unknown at 6:00 AM

Sounds like you have the makings for an excellent book! Thanks for sharing.

Larynn- I can seeing it playing out as a scary movie that I wouldn't be able to watch. Ghosts creep me out.

Thanks, Chris! My family is planning a get together so we can sit around and tell scary stories. There's always this one cousin who runs through wearing a scary mask or holding a chainsaw. That's gets us in the Halloween spirit for sure.

I love stories like this - local legends that may or may not be based in fact.

In the little English village where I lived for three years as a child there was a legend about the 11th century church at the top of the hill. It is to this day an active Anglican church, but it was build around the time of William the Conqueror as a Catholic church.

Legend had it that if you walked around the church backwards thirteen times on the thirteenth time you would disappear! As brave as we all wanted to appear as young children none of us ever made it past twelve and a half times before we chickened out. There was a terrific old cemetery all the way around the church with some really old headstones. We used to sneak up there at night and tell ghost stories until one night when we heard something like the clinking of armor and slow hoof beats. I think we set a land speed record that night and we never did that again!

Love the story! I really enjoy hearing about urban myths and sometimes I go and check them out. :)

Hello Ms White.
There are a few more from Miller County that Hardy get told about the White's Bridge area. You see I'm from between Colquitt and Bainbridge. My maiden name is Musgrove. My father Ike was well known. If you ever want to hear just contact me thru Facebook. It's Mary Joyce Edwards. My profile picture say a Georgia girl and a prolife picture for my cover photo.