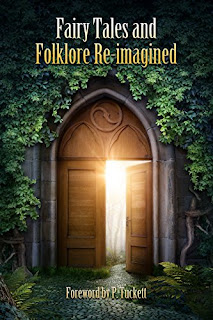 ·       You've heard about the prince who rescues a princess locked in a tower and guarded by a fire-breathing dragon. The little girl with the red hooded cloak or black dogs who prowl the forest and moors. Just beyond the hedge is another world full of magic, mystery, and wonder. The talented authors found within these pages challenge the traditional norms and accepted stereotypes through poetry and prose that will stay with you beyond the last page. Step through the door and leave this world behind.

Excerpt:
The locked door fascinated and puzzled her. She could open all the others in the house. Some, with tiny keys were no bigger than a sliding shelf. Others were as tall as the ceiling, and she had to press her hand to a pad and be recognized. But the locked door eluded her.

Standing at the end of the hall, it was dark gray, adorned with strange blue symbols and letters that formed no recognizable words. It had a tiny round lock built into the bar across it. And it stayed locked.

She pushed against the bar just to be sure. It gave an unsatisfying clunk, but did not open.

“Isabelle. You must never go into that room.” Robert took her by the hand /his grip hurt, it was leaving a bruise/ and led her away. “If you go in there, you will suffer.”

And he smiled his perfect smile with his perfect teeth. A chill crept down Isabelle’s spine.

“I don’t have a key. How would I get inside?” Her petulant tone embarrassed her. She sounded like a child in a grown-up body. She should demand the key, make Robert give it to her. This was her house, too.

Robert ignored her question and wrapped a strong arm around her shoulders. “I know. How about we have Anne visit? You always like to see her.”  Isabelle shivered.

“No, it’s always the same when she visits.” /What kind of mother was she that she didn’t want to see her child?/  “I’m tired. I think I’ll go lie down.”

They took a turn down an unfamiliar hallway, and Isabelle stopped. “Where are you taking me?”

“To our bedroom, silly.” Robert opened the door beside them. Inside she saw the bed and the cerulean curtains she’d picked out for the window overlooking the courtyard. Isabelle hesitated on the threshold. /Had Robert moved the curtains... and their bedroom furniture to this new room?/ She glanced back down the hallway.

“Come and lie down.” Robert patted the soft duvet and then folded back the covers in invitation.

Isabelle crept into the room and sat on the side of the bed. /She was exhausted./ She kicked off her slippers and slid her feet into the cool sheets. The down pillow cradled her head as she lay back.

A soft click surprised her. The bracelet on her right arm was now attached to a thin chain that stretched under the bed. Isabelle jerked her arm, but the chain held.
“What’s the meaning of this?” She sat up, but Robert pushed her back into the soft mattress.

“Just a precaution. You’ve been wandering in your sleep, remember?” His look of concern stopped her from struggling. She searched his calm blue eyes. /I don’t remember./

“Now take a nap, pretty girl, and I’ll come fetch you for dinner.” He smiled at her, and then leaned down to kiss her, the barest whisper of a touch against her forehead.

Isabelle closed her eyes, sinking further into the warmth of the covers. The softness called to her, her limbs heavy and the room quiet save for Robert’s retreating footsteps.

As soon as she could no longer hear him, Isabelle opened her eyes and struggled to sit. She pushed the blankets to her waist. The chain tautened, pulling her wrist down. /Am I a prisoner?/

She had to escape. The room. The locked room must hold the answer as to why she was being kept here. Why Robert chained her up at night.

Isabelle inspected her bracelet, looking for a clasp or a weakened wire she could use to tug off the offending jewelry. When she found only smooth metal /smooth as if it was welded around her wrist/ she yanked until the skin turned dark with bruises, swollen and painful to the touch.

She turned onto her belly to scrabble in the nightstand for a tool, anything to break the chain.

But there was nothing. The drawer was empty. There was only the empty nightstand, and the lamp screwed into the wall. Isabelle fell back onto the covers defeated. Exhaustion dragged her eyelids down and she crawled back beneath the duvet. As soon as she closed her eyes, she slept.

She felt his weight on the side of the bed first. Isabelle opened her eyes to see Robert with a small ring of keys, disconnecting the chain from her bracelet.

As the chain fell away, her hand moved without willful thought and she snatched the keys. Isabelle rolled to the opposite side of the bed and stood in almost one movement.

Robert rose to his feet, the resigned look on his face at odds with his words. “Give me the keyring, Isabelle or you’ll be sorry.” He held out his hand.

For a moment, Isabelle reached to give the ring back to him. But the bracelet gleamed on her wrist, the skin beneath it swollen and mottled like an overripe peach. She snatched her hand back and ran for the open door.

“Isabelle.” Robert moved fast. He crossed the threshold just as she slammed the door. His muffled grunt of pain /or was it surprise/ didn’t stop her as she darted down the hallway.

Isabelle looked back once to see him limping, his ankle turned at a wrong angle to the rest of his leg. /Had she done that?/

She flew down the unfamiliar corridors, blank doors set in the sides like eyes judging her. /Where was it?/

The keys weighed down her hand as she ran. Like a dense piece of gold, cradled in her fingers.

She turned corner after corner until /there/ at last she saw the inscrutable blue symbols.  Isabelle gasped as she halted at the door, her chest aching with the pounding of her heart.

She glanced over her shoulder, certain that Robert would come around the corner, snatch the keys from her and lock her away again. But nothing was there except the empty corridor and the locked door.

Isabelle wondered what she would find in the room. Would Bluebeard’s murdered wives greet her on hooks suspended from the ceiling or lie blood-spattered on the floor?

She flipped the keys, looking for one with a round shank the size of the lock. /Here./ With trembling fingers, she inserted the key and turned.

Nothing. The door didn’t budge.

Isabelle rotated the key the other way, and the tumblers rolled. She put her shoulder to the door and shoved. But it didn’t move.
Isabelle wanted to cry. She was so close.
A limping footstep echoed behind her. /No!/ Robert would catch her.
She jiggled the flat head of the key in the lock, pressing on the bar again and again, the syncopated sound like hitting a metal pipe in rhythm to the jingling of the keys on the ring.

And then the door swung wide. Isabelle darted inside. And stopped.

The footsteps /step, drag, step, drag/ halted at the doorway.

“Isabelle, I tried to warn you.”

And the lifeless bodies and body parts scattered across the floor.

In a corner, limp as a doll /she is a doll/ sat Anne, her daughter, her baby. Her eyes were closed and the battery pack attached to the power cord lay charging on the floor beside her. Her chest cavity gaped, the absence of her power pack exposing the wires and framing where Anne’s heart should be.

Another three robots hung from hooks. One lay prone on a work table, arm gone, in a state of repair. Buckets held legs and heads. Bins of hardware and tool boxes dotted the room.

The sobs rose in Isabelle’s chest, big clots of pain that tried to squeeze the breath from her lungs. Robert gathered her into his arms and she clung to him, to his strong shoulders and wide chest, crying out her sorrow.

“Shhhh.” Robert petted her hair with a gentle hand. “It will be all right. You just forgot again.”

“I’ve outlived them all. I’m alone.” The harsh words ripped at her throat as she said them. /You’re not alone. Robert is here. Anne is here./ “And I hu... hurt you.”

“Nothing that can’t be set to rights.” His hushed voice soothed her gulping sobs. “Do you want me to take you back to the bedroom or would you rather stay and watch me work?”

“Stay.” She whispered it against the collar of his shirt. She pulled away from him, rubbing down the material she’d wet with her tears. /So many needless tears./
Isabelle dropped into a plastic chair, wiping at her cheeks.

Robert limped to the worktable. He pressed a button, and a hook lowered from the ceiling winch. He inserted it into the robot on the table and then pressed the button again to lift the automaton up and away. The familiar movement sparked a memory of her own hands working at the table.

He unscrewed his lower leg at the knee and placed it on the table.

“Yes. The year after your husband died. A few years later you had artificial insemination and Anne was born.” He rubbed a hand down his dented leg in a very human gesture. “I think you were happy then, with your robots, your created family. At least, you told me you were.”

“But she died, too.” Isabelle couldn’t keep the sob out of her voice. “And I got old.” She fingered a long strand of hair, marveling that she hadn’t noticed how gray it had become. And then she saw her hand, the brown spots and spindly fingers with loose skin. /So old./

“I didn’t.” Robert reminded her. “I’ve worked by your side for decades now.” Robert watched her with his blue eyes, the exact shade of the painted walls behind him. /A calming blue./

He reached for a pair of needle-nosed pliers, a hand’s length out of his reach. Isabelle rose from her chair and handed them to him.

Robert ducked his head in a grave nod. “Yes, my love.”

Aidee Ladnier, an award-winning author of speculative fiction, began writing at twelve years old but took a hiatus to be a magician’s assistant, ride in hot air balloons, produce independent movies, collect interesting shoes, fold origami, and send ping pong balls into space. A lover of genre fiction, it has been a lifelong dream of Aidee’s to write both romance and erotica with a little science fiction, fantasy, mystery, or the paranormal thrown in to add a zing.
Connect with Aidee at   Website     Facebook     Twitter

See Labels near the bottom for the link to "editor or agent interviews."