Recently, I had an experience that I hope taught me something about what I need to look for in my book contracts and I thought I'd share that here for some of us who either haven't yet signed a contract or who have and may not have considered a paragraph such as I will be discussing. I was lucky enough to have it in mine in this particular instance but it was totally not because I knew to ask for it. Thank goodness the publisher thought it was important.

Anyway, I got a set of edits (not my first book with this publisher, by the way) not too long ago and I tell you what, that editor who was assigned to work on my manuscript was one of the unkindest people I have ever come across. For some reason, my story brought out the absolute worst in this lady. I don't know what struck her core but something sure did. She did not like one thing about what she was reading. She hated the heroine, the hero, the premise of the book, and even the villain was too villainous for her. Yep. She said that.

I'm not sure about how editors are assigned but I would hope if someone's story struck such a negative nerve in the editor that they could ask to be reassigned. This woman did not do any such thing; rather, she took her venom out on my poor psyche. Nasty comments abounded which made me hate my own work that I'd been so happy to submit and have accepted by the publisher. Now, that's pretty harsh treatment there.

A couple of examples: "You must not have worked very hard on this book as I've read one of your other books and it was better."; "You must not like your characters."; "I want to cold-cock your heroine." (AND this was not meant in a sexual way); "I want to tell her to go screw herself." and, after highlighting most of a chapter: "Rewrite this as it's nonsensical." No guidance, nothing - just rewrite it. And one comment was just, "You're kidding." 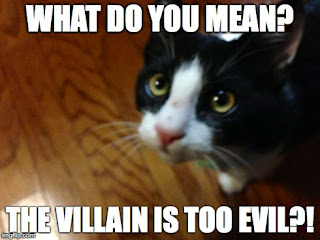 Somehow, I think editors are supposed to make the story shine, not tear down the manuscript or insult the author by basically calling her lazy and/or inept. I did the best I could with what the woman sent me but I looked over my contract to see if I could take my rights back since I was so unhappy. Before I did so, I emailed the editor in chief about the whole thing and asked her to look at the comments. I was then offered a fresh edit from scratch. The editor in chief also pointed out a contract provision I didn't notice in my haste to find the one about returning my rights to me.

Happily, the contract has what I am calling an "Author's right of last refusal" paragraph. This paragraph means I can refuse any and all of the edits. I have final approval of the manuscript. That makes me feel a whole lot better and I recommend making sure you have that kind of provision. A book going out with your name on the cover should reflect what you want it to, not what some woman who hates the book thinks it should.

The other thing that made me feel better was the editor in chief said she contracted the story as it was and she thought it was good. My poor lil ole ego that had been crushed to the core needed that. :) Yes, I admit, I let the vicious comments move into my head and make me think I was a terrible writer.

Why do we do that to ourselves? Why do bad comments tend to stick and the good get glossed over? Any ideas on how we, as writers, can learn to focus on the good? Let the negative go?
Posted by Jillian at 12:00 AM

I'm so sorry to hear that, Jillian. We forget that we can stand up for ourselves and still have a career. That is, as long as we act professional. I'm glad you did it the right way, the professional way. Now for me to go and check out my contract though I couldn't imagine my new editor doing that - she kindness through and through. I pray every day that she never leaves for I did have an editor who didn't like my writing a whole lot. Thus why I have a new publisher.

Thanks Carla. I appreciate it. And yeah, I handled it the best I could. I confess, I made snarky comments back that I erased before turning it in. Lol. It was the only way to stay same. Haha. But I did the professional thing and deleted them. I DID make it clear as well that I would not work with this person again. She's new and man, they need to rein her in.

And good for you, too for moving on to a new publisher.

I'm so sorry you went through this, but thankful you shared what you learned from this experience.

Okay...I'm an editor, twenty years experience inc as a managing editor. If an editor working for me had done this I'd have given her a final written warning if full time, or never used her again as freelance. This is disgraceful. I would like to hear you had a full, fulsome apology from the publisher and that the editor is being either remedially trained or, preferably, let go. If the publisher has not grovelled, I would make unflattering deductions about their professional competence.

This is someone who obviously has no clue how to be an editor being let loose on your work. That is unacceptable.

NB: another clause to look out for is the one that says your work will be 'professionally' edited and proofread. And make sure you have a breach of contract clause in there too. So you can say, "this is not a professional job of work therefore you are in breach". (Professional editors don't bitch and snark all over MSS.) There are a lot of places using totally untrained people as 'editors' because real editing costs too much money. But if a publisher isn't stumping up for that, I can't see why authors should be giving them 60-70% of the net receipts.

thanks Nancy- it was brutal and demoralizing for sure.

KJ Charles: thanks for the input - I have not heard what they have done about her but I did tell the EIC she should spend some time training this person because the lady was unprofessional and overstepped all bounds of decency. I have over 25 sets of edits under my belt and if these had come across to me in my early years, I would have absolutely quit writing. No one should be subjected to such and I hope they have let her go. They have apologized to me and have said at least three times now that they will not publish what I don't agree with. Which makes me happy.

Wow. That is pure misery. I feel like it's when I was dating lo those 20 years before marriage, and soooo many guys would be all, "you COULD be so attractive if you just lost weight." Um, just find someone you think is attractive the way they are!

They liked the book enough to acquire it. Why change the essence?

I agree with the other comments that it is not a "professional edit" and not the way a professional organization behaves. And your MS editor should have spoken up to the person in charge before spending time making those edits...that it was not a good fit and they couldn't edit it the way it needed to be.

And thank you for the contract tip. Another author who debuted last year said she basically ignored 90% of the edit recommendations because it wasn't her story any more. And her books are awesome the way she left them. I remember reading the first one thinking, "so when is all the lack of editing going to show?" It never did. I think she took the advice that improved the book and left the rest.

Wow, Ali. I admire your friend for being so confident in her story even as a debut author. I was letting the edits affect me and my confidence so I think it's super awesome that your friend stood up for her story so well.

AND your analogy about the dating thing was spot-on. I agree.

The EIC was okay with the book as contracted. She had no idea this lady was so rude. I thought I would die before I got through what I could deal with. I only could manage looking at/dealing with one chapter a day. I was sick to my stomach even doing that. It was pretty miserable.

lessons were learned though. So t here was some value there. :)

Thank you for sharing your experience. I'm grateful for the contract advice from you and some of the other comments. I'm glad it worked out in the end and sorry that you were so sick and worried over it. The best restitution for your pain, suffering, and emotional distress might be for this baby to take off and fly. Woot! Right to the bestseller list. Hugs.

thanks Meda - from your lips to God's ears. :) And thanks for the sympathy/empathy. You're so sweet. And we have had some great comments today.

I was there when you commented online and knew right away that there was something fishy about the editor and her comments...I think your instincts are right that you 'struck a nerve' with her.
I am glad that you were vindicated by the editor in chief, but sorry that you went through all the heartache. The ed. in chief's comments should wash away all of the negative by the incompetent editor, but , alas, it isn't that easy, is it?
I hope you have wonderful success with the book, if only to get back at that darned editor!

I'm so happy that the EIC apologized and let you know about the clause that you don't have to accept the edits. Good information to know.
It sounds like things are moving along in the right direction now. I'm sorry you had to muddle through the s**t first.
Trisha Faye/Chrys N Jay

Thanks Tonette. I am super nervous about the book now. What if it strikes the same cord with readers and reviewers? See what I mean? That would be bad, too - even worse, really.

Trisha- me, too. That made me very happy- it was what I needed to hear- especially the part about her contracting the story because she liked it. AND yeah, I hate that I went through that too because it makes me nervous as heck about the public perception of it when it comes out.

I'm so sorry to hear you've had to go through this, Lady Jillian. Authors endure enough rejection as it is without being subjected to derogatory statements made by an editor who was hired to help sculpt a book to professional polish.

Continue to share your experience and grow from it. Prove that editor wrong. Make this story the BEST EVER! I know you CAN!!!

Blessings to you, dear friend!

thanks Kathy! I appreciate the confidence you have in me. I'm pretty sick over it still and wonder if it'll be chewed up by reviews. AND I agree there is no need for derogatory statements from someone who is supposed to be on my side. Love ya, girl!